…….After cupping these coffees, I was blown away at the cupping profile.  Flavors of Juicy Fruit candy, creamy strawberry, tangerine acidity, intensely sweet and a balanced lingering acidity.  I brewed a Chemex of this in Calgary and found myself gulping it back like I was in a beer drinking competition back in College.  I quickly realized that I had NO CHOICE but to buy some.  Our 200 lb lot of Panama Mama Cata Full Natural Geisha will be available July 2011……Now let me start at the beginning….. 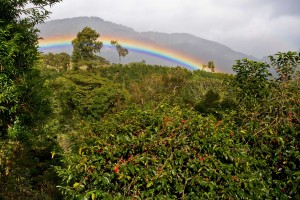 For many years the most expensive prices paid for coffee has been a rare coffee found in Panama.  The record for this Panamanian coffee was set in 2007 when an auction fetched over $150 USD / lb (Green) for coffee grown at Esmeralda Estate using the Geisha Varietal.    Since this time, it is not rare for people to pay 10-20 times the regular asking price for this rare coffee.  In a café setting it is no different.   To get a taste of this coffee, you should expect to pay $10-12 per cup.  Is it worth it?  I think so.

So what is with this coffee and what makes it so unique?  I wanted to know as well, so the purpose of going to Panama was to begin to learn about this varietal and appreciate what it brings to the cupping tables.This very rare varietal (Type of coffee tree/cherry) is called a Geisha and was originally found in Panama over 40 years ago, but is said to have originally come from Ethiopia in the 1930’s, traveling through Africa, into Costa Rica and finally arriving into Panama in the 1960’s.   In the past 4-5 years we have begun seeing more countries in Central & South America now planting Geisha trying to see if they to can grow this coffee, and be rewarded with the same pricing.  So far this year I’ve seen Colombia and Costa Rica successfully harvest this varietal and receive upward of $50 USD / lb (Green).

When speaking with Jose David licensed Q Grader & owner of Mama Cata and the Garrido Estates, he tells me about a time when his father first began planting coffee trees.  He remembers his dad telling him how he went to buy coffee trees but the cooperative was almost sold out.  The only trees left were these tiny ugly trees called Geisha, he didn’t want them, but it was that or nothing. 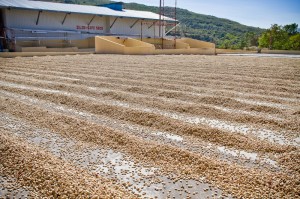 He soon found out that there are many issues with the Geishas.  For starters they are extremely slow at growing and will usually take 7 years before they start-producing fruit (compared to 3-5 years).  Once producing the coffee cherry’s you will find that they yield around 75% less cherry then other coffee varietals.  In order to get these coffee trees producing fruit year after year, you will need to feed them twice as often with fertilizers (6-7 times per year compared to 3-4 times).  On top of the low yielding, slow growing and very hungry trees, you will find out that they are very susceptible to insect damage and diseases. 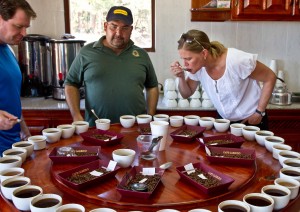 So why in the world would a coffee farmer continue to grow Geisha?  Funny enough, Jose David’s father decided to keep them primarily because they were beautiful looking trees.  He would have felt bad about cutting them down.   It wasn’t until many years later, once starting to cup coffees from trees, instead of blending them all together, did they realize that what was growing was not only unique, but outstanding in the cup. 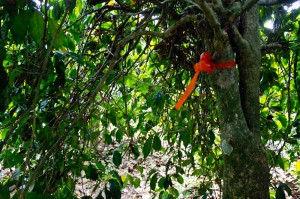 To this day, many of these trees still exist and are still producing fruit.   Many things have changed since Jose David began working the farms.  Today they pick coffee and keep that coffee separate on EVERY Geisha coffee tree.  Each are marked for cup quality and characteristics.  Each day’s pickings are dried and processed on their own, with a GPS Settings attached to each lot for complete tractability/traceability. What they have begun to realize is that Geisha’s are not all the same.  Even neighboring trees can have very different cup profiles, and often do not have a “True Geisha Cup Profile”.   In some cases they have found that trees are picking up flavors of neighboring trees, like orange and lemon trees.  Due to this, wind barrier trees, or “flavor blockers” have been planted to protect the Geisha’s. 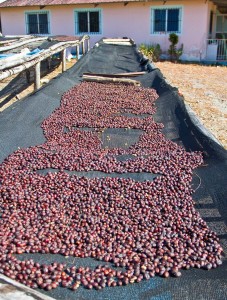 Elevation plays a large part in producing the most desirable cup characteristics in Geisha.   We found that lower elevations of 1500 meters gave a very sweet cup and also found the acidity in Geisha grown at 1800+ meters produced an acidity which was hard to tame (Lemon & Orange Zest). 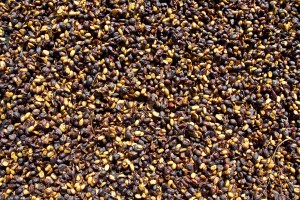 Jose David doesn’t stop here.  He has shown me the evidence on his cupping table what his constant innovation has done.  Jose David is always working with different processing methods like Honey Prep or full Natural coffees, but he is the first one that I have seen to do the “Cracker Jack” process or “Half Natural” (TBD).  This involves saving the skin of the cherry after de-pulping, and re-mixing this into the drying coffee that has been Honey Prepped.  Crazy!   Next up for him is trying a wet hulled process, which is common in Sumatra. 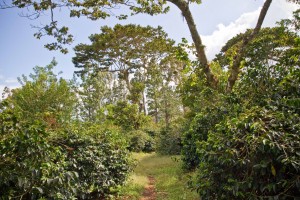