"For us, our family, we’ve been in coffee roasting for 29 years or more. This isn’t just work for us. We love this stuff."

Fratello Coffee Roasters’ history dates all the way back to 1974, when founder Cam Prefontaine first began selling coffee and other hot beverages to offices under the Fontaine Beverages banner. Moving the company and his family to Calgary the next year, Fontaine Beverages operated out of the family’s garage and basement, with Cam’s three young sons watching their dad grow his business. The boys were involved in the coffee business from the start, earning their allowance by helping Dad service old coffee brewers.

Fratello Coffee Roasters’ history dates all the way back to 1974, when founder Cam Prefontaine first began selling coffee and other hot beverages to offices under the Fontaine Beverages banner. Moving the company and his family to Calgary the next year, Fontaine Beverages operated out of the family’s garage and basement, with Cam’s three young sons watching their dad grow his business. The boys were involved in the coffee business from the start, earning their allowance by helping Dad service old coffee brewers. In 1985 Cam was ready to move beyond the world of instant coffee, so he started the new company called Custom Gourmet Coffee by trading companies with a local coffee roaster and began roasting premium high-quality coffee beans himself. Cam’s mission was to treat his clients (as well as his growing staff) like family, while supplying them with high quality coffee as well as excellent service and support. As one of the first coffee professionals in the area to focus on higher quality beans, Cam became a pioneer in what we now know as modern café culture in Calgary.

Cam’s two eldest sons Chris and Jason partnered with each other in 1991 to open Espuccino Imports, the exclusive distributor in Alberta of Nuova Simonelli espresso machines, Ugolini granita equipment, Lamber dishwashers, and other Italian equipment. The company quickly became a dominant force in the Southern Alberta food services equipment market through the brothers’ determination and their dedication to offering a high level of service, training, and support. Youngest brother Russ joined Jason and Chris as a service technician in 1994.

In 1997 Cam successfully fought off two bouts of cancer and decided it was time to sell his roastery to his three sons. It was at this time the three brothers formed their equal partnership. The brothers’ plan was to combine Custom Gourmet Coffee and Espuccino Imports under one roof to provide clients with a one-stop-shop. By 1999 the company was growing throughout Western Canada at a clip of 15 to 30 percent year over year. But rapid growth isn’t always a good thing and the relatively inexperienced young businessmen experienced a fairly steep learning curve. The company’s focus on growth led it to accept pretty much any type of customer, including U.S. wholesale clubs, hotels, airlines, cafes, and the introduction of new coffee pods. In 2004, the brothers expanded further to start Valleta Flavors, a syrup bottling line for coffee syrups, chai, smoothies, and granita mixes. The belief was “we can be good at everything!” which, of course, rarely proves to be true.

In 2007, after examining the rapid growth and subsequent dilution of their brand, the Prefontaines made a brave choice. Custom Gourmet Coffee was rebranded as Fratello Coffee Roasters, the name coming from the Italian word for “brother.” They sold off Valleta Flavors and Pacific Rim Coffee Service (the Vancouver-based arm of the company) and discontinued their dealings in the U.S. and Korea. A huge chunk of the assets in the roasting plants were liquidated and the number of staff dropped from 85 to 18. In order to become the kind of company it wanted to be, Fratello needed to scale back, rebrand and focus! A bold rebranding strategy was put into place in an effort to re-establish Fratello as a different kind of coffee company,

A bold rebranding strategy was put into place in an effort to re-establish Fratello as a different kind of coffee company, specializing in high-end coffee and earning a reputation for excellent levels of training and support with its like-minded wholesale customers. Along with the new focus, the brothers went “back to school” to expand their knowledge of coffee and keep up with the rapidly changing trends in the industry. They started traveling to the countries and farms where their coffee was grown to meet the farmers and families who produced the raw product. Through these experiences, they realized how little was known about this process and decided to invest more time to support their growing partners.

Which brings us to where Fratello Coffee Roasters are today — a family-operated business helmed by brothers who grew up with coffee and have developed an enthusiasm for roasting a high quality product made from beans that are carefully chosen and ethically sourced. The Prefontaine brothers still dream big — but they’re focusing on what they love and bringing that passion to every cup of coffee and bag of beans they sell. 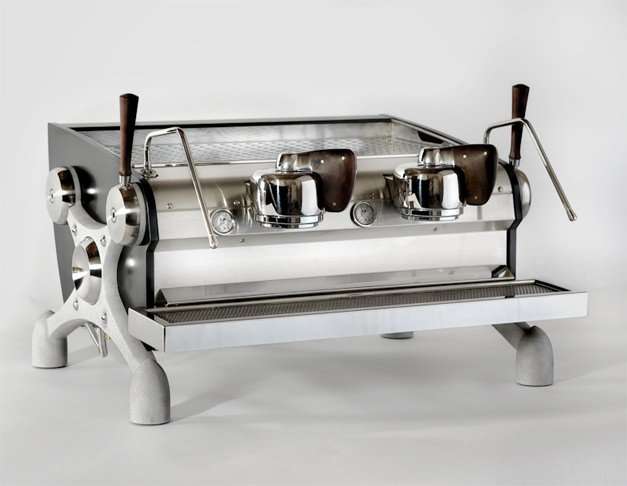 Slayer Espresso:
A Star is Born

Superior coffee beans deserve to be brewed in a superior machine. The Prefontaines’ commitment to expert brewing led them to invent a specialized machine that is unlike anything that has existed before it. Knowing there was specific demand from coffee professionals for a machine that could flavor profile the unique varietals that Fratello was now producing led to the ambitious decision to create a machine from scratch that would dramatically expand brewing possibilities. So, in 2007, the same year they rebranded Fratello, Slayer Espresso was born.

Slayer introduced independent temperature and pressure control at the group head, in a beautiful espresso machine purpose-built to enable baristas to craft each shot. In 2009 the Slayer manufacturing team, lead by oldest brother Jason Prefontaine, moved to Seattle, Washington, the coffee Mecca of the northwest USA, to start as a stand-alone company that is operated separately from Fratello to avoid any conflict of interest.

After 15 years of talking about starting a café division, in March 2011 Chris and Russ took a huge leap and opened Fratello’s Analog Café in the Calgary Farmers’ Market on Blackfoot Trail SE. In November of 2012 the brothers’ dream was taken to the next level when they opened a second Analog in an ideal location at 740-17th Ave SW, right in the heart of Calgary’s beltline community. After spending so much time training and supporting Calgary’s independent café owners, opening Analog allows the Fratello team to practice what they preach by offering a complete coffee house experience and have a direct voice on the street to their clients.

Chris’s passion for the coffee industry dates back to his high school days. Starting out with their father’s company, Custom Gourmet Coffee, Chris and his brother Jason learned the ins-and-outs of the coffee business from their dad, before beginning to strike out on their own. In 1991 Chris and Jason founded Espuccino Imports, Southern Alberta’s master distributor for Nuova Simonelli espresso machines. In a period of only three years the brothers built the company into the third largest distributor in North America.

In 1997 Chris and Jason teamed up with their younger brother Russ to purchase Custom Gourmet Coffee from their parents and eventually changed the name to Fratello Coffee. Their goal was to provide high-quality coffee and support to cafes and coffee drinkers in Calgary and the rest of Western Canada, while helping to usher in a new era in coffee culture. The brothers also had an ambitious dream to develop a revolutionary new espresso machine. That product, the Slayer espresso machine, has been an extraordinary success and is now delivering perfectly-brewed coffee to consumers around the world. Chris’s latest project is the start-up of Fratello’s retail café division through the Analog Café brand.

After growing up around his family’s work in the coffee business, Russ began his full-time coffee career in 1994 when he joined older brothers Jason and Chris at Espuccino Imports, a company specializing in Nuova Simonelli equipment, installation, and service. In 1997 the three brothers purchased their parents’ roasting company, combining all aspects of roasting, equipment, training, and service under a single banner. Russ is now the full-time coffee buyer and Director of Coffee for Fratello, frequently travelling around the world to visit the farmers that provide Fratello with its raw beans. In 2007 the Prefontaine brothers began developing the first Slayer Espresso machines, before moving that end of the business to Seattle. Russ and Chris partnered in 2011 to open Analog Coffee at the Calgary Farmers’ Market and then the stand-alone Analog Café on 17th Avenue SW in late 2012.